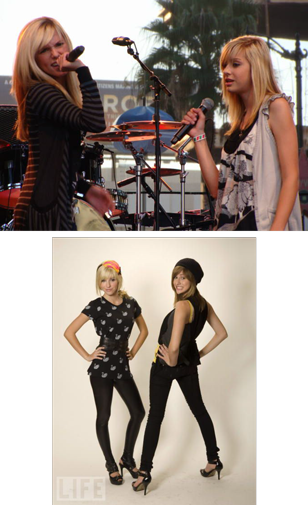 The sisters sang together as children and formed the duo after they had both learned to play guitar. They began recording their debut release on the Firm Music label in 2007. They have appeared in a variety of catalog and print ads including Pottery Barn Kids. In October 2007 they released a digital only EP entitled Christmas in California which was featured on the ym.com website’s “What’s Hot This Week” on Novemeber 6, 2007.

On October 27, 2007, they performed at the first day long Girlfrenzy Festival which was held at the Verizon Wireless Amphitheater in Irvine, California and featured acts such as Avril Lavigne and Sheryl Crow.

“Waiting for the Heartbreak”, their debut single, was featured on the MTV series Newport Harbor: The Real Orange County, episode 201, “Are We or Aren’t We”. It won Radio Disney’s Music Maibag on January 19 2008, earning them online and regional airplay on Radio Disney stations.

L.A. Manager Debra Klein initially came to Slang to do a remix of Savvy and Mandy’s Disney hit “Waiting for the Heartbreak”. After successfully completing the remix, discussions began around the possibility of composing and producing new songs for Savvy & Mandy. The girls were flown to Chicago to create a pop-rock cover of "Dream", originally recorded by the Everly Brothers. Slang’s versatile music production skills allowed for a seamless recreation of this song, which helped bridge the "age gap" as the young sister duo continued to mature.