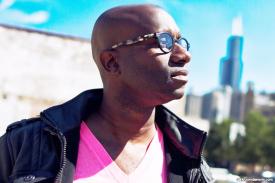 Vince Lawrence
Composer and musician Vince Lawrence was officially recognized by the City of Chicago for his role in creating House Music during a ceremony at Millennium Park over the Memorial Day weekend.

An estimated crowd of 40,000 — on hand for the city’s annual Chicago House Party event — cheered as Lawrence took the stage to accept the award with his wife Tara, his mother Jean, his son London and his daughter Yasmine.

“Looking at where we started and where house music stands today,” he said afterwards. “It’s amazing.”

A teenaged Lawrence and DJ Jesse Saunders ignited the phenomenon that would become House Music from a bedroom on the south side of Chicago during the wee hours of a spring morning in 1983. The childhood friends were finishing off a weekly ritual that they had developed while hosting all-night teen dance celebrations in a juice bar called The Playground at 13th and Michigan Ave.

With the help of Saunders’s DJ brother, Wayne, the young impresarios filled the room by spinning the likes James Brown, Kraftwerk, Martin Circus, the B52s and “all the John Rocca songs.”

When the parties ended, they would fuel up on steak and eggs at nearby White Palace Grill before trekking down to Saunders’ home at 72nd and King Dr., where they would continue recording and playing music.

On one typical morning in the spring, they patched a Korg Poly-61, a Moog Prodigy, a Roland TB-303 and a Roland TR-808 into a “newfangled Yamaha MT44 Multitrack Cassette Recorder.” Then they recorded a song called “On and On,” which is considered to be the first house music track in history.

Within a few years, the sound could be heard “throbbing from the speakers at the hippest dance clubs in New York and Europe,” according to a 1986 Tribune article by Daniel Brogan. The catchy bass lines and dance appeal prompted many to nickname the genre “disco’s revenge.”

For Lawrence, the success was extra sweet. He had been an usher at Comiskey Park during the infamous “Disco Demolition” rally in 1979, when radio talk show host Steve Dahl started a riot by exploding disco records with firecrackers on the infield between a doubleheader.

Fans received free admission to the event if they donated a disco record for demolition. But, according to Lawrence, most of the records they brought were not disco.

“The people brought in specifically black records,” he says. “I said to my friend, ‘that’s a funk record, that’s a blues record.’”

At the time, the soundtrack for Saturday Night Fever was midway through a three-year ride on the Billboard Top 200 Album chart. Its cover featured John Travolta.

Travolta's unmistakably caucasian face represented disco to the mainstream, yet fans that night were willing to wreck the likes of Stevie Wonder's multiplatinum 1976 funk / soul / R&B masterpiece, Songs in the Key of Life, for a free seat at the destruction.

“Disco demolition was widely anti-Black, anti-Latino and anti-Gay,” Lawrence continues. “That was the first time I had that kind of ideology thrown in my face.”

The misguided negativity did not prevent Lawrence and his crew from getting things done.

“All of us poor and middle class teens from the south side of Chicago were in the record business,” he says. “By osmosis, we were becoming black entrepreneurs. We were becoming Latino distribution companies, black DJs, promoters and studio owners.”

In 1989, Lawrence stopped by a recording studio to pick up his friend Dave, a member of the band Sonia Dada who was playing guitar for a commercial session. It would be a pivotal moment in his career.

“They were having some difficulties communicating with an engineer,” Lawrence explains. “So I just kind of blurted out the solution because I wanted Dave to get out so we could go to the Shelter and party.”

One of the clients in the studio was Bill Daniels, who cofounded Equinox Advertising with Bernie Washington. Impressed by Lawrence’s technical abilities, he wanted to hear what Lawrence could do on the creative side.

“He said ‘if you can make music that resonates with teens, I’ll have a job for you,’” Lawrence recalls.

Today, Lawrence’s Slang Music Group creates and records tracks for commercials, television and a select group of well-known artists. Big Sean, Oprah Winfrey and Honda are just a few of the artists and brands enhanced by the studio’s creations.

Lawrence also continues to work on original compositions. He is currently one-third of The 312, a trio that includes Felix Da Housecat and Jamie Principle. The group released “Touch Your Body” on the Crosstown Rebels label last summer.

Billboard described the collaborators as “three important figures in the history of Chicago house music.” While Lawrence is happy with the recognition, he responds with characteristic modesty.

“It’s awesome to even claim such a connection, because it’s way bigger than us as people,” he says. “We just wanted to make a record that would move a crowd.”